The Trevi Fountain or in Italian, Fontana di Trevi is the largest (standing 25.9 meters or 85 feet high and 19.8 meters or 65 feet wide) and most ambitious of the Baroque fountains of Rome. It is located in the rione of Trevi. The fountain is at the juncture of three roads (tre vie)marks the terminal point of the "modern" Acqua Vergine, the revivified Aqua Virgo, one of the ancient aqueducts that supplied water to ancient Rome. In 19 BC, supposedly with the help of a virgin. Roman technicians located a source of pure water some 13 km (8 miles) from the city. (This scene is presented on the present fountain's facade). However, the eventual indirect route of the aqueduct made its length some 22 km (14 miles). This Aqua Virgo led the water into the Baths of Agrippa. It served Rome for more than four hundred years.[4] The "coup de grace" for the urban life of late classical Rome came when the Goth besiegers in 537/38 broke the aqueducts. Medieval Romans were reduced to drawing water from polluted wells and the Tiber River, which was also used as a sewer.

Information shown above and on photos of Trevi Fountain were taken from Wikipedia. 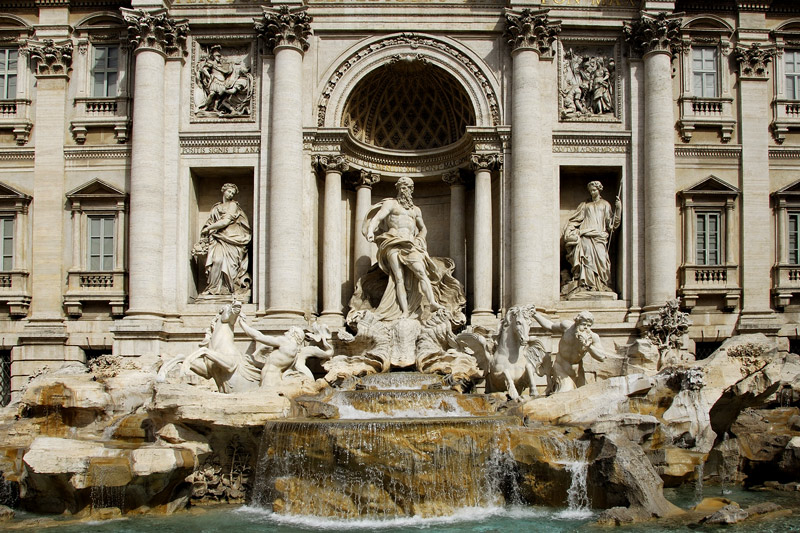 In 1629 Pope Urban VIII, finding the earlier fountain insufficiently dramatic, asked Bernini to sketch possible renovations, but when the Pope died the project was abandoned. Bernini's lasting contribution was to resite the fountain from the other side of the square to face the Quirinal Palace (so the Pope could look down and enjoy it). Though Bernini's project was torn down for Salvi's fountain, there are many Bernini touches in the fountain as it was built. An early, striking and influential model by Pietro da Cortona, preserved in the Albertina, Vienna, also exists, as do various early eighteenth century sketches, most unsigned, as well as a project attributed to Nicola Michetti one attributed to Ferdinando Fuga and a French design by Edme Bouchardon.

In the center is superimposed a robustly modelled triumphal arch. The center niche or exedra framing Oceanus has free-standing columns for maximal light-and-shade. In the niches flanking Oceanus, Abundance spills water from her urn and Salubrity holds a cup from which a snake drinks. Above, bas reliefs illustrate the Roman origin of the aqueducts.

The tritons and horses provide symmetrical balance, with the maximum contrast in their mood and poses (by 1730, the rococo is already in full bloom in France and Germany).